A reason to love Mondays...


There has to be one, right? A reason to be excited that the weekend's over? The best one I can think of is that it's CSA pick-up day. Farmer James will be at the meeting place with my big basket of veggies. It's like a little Christmas or birthday getting my basket and seeing what surprises are inside. These days the best surprise is no cucumbers. We've been a little heavy on cucumbers and frankly one can only eat so many cucumbers. Fortunately, I've found many unsuspecting people to gift cucumbers to who seem to appreciate them. Anybody have any good cucumber recipes? Anybody need any cucumbers?


What I can't get enough of though is eggplant, tomatoes and zucchini! The boys were gone this past weekend so Mary Rollins and I had the most wonderful eggplant meals. Check out this ratatouille tart that I made on Friday. I'm a huge fan of tomato pie and experiment with variations on it regularly but this tart is amazing and beat out tomato pie as my new favorite summer meal. MR and I ate half of this one for dinner. We took the other half to Connie and they finished the remainder off but did so over dinner and breakfast. MR & I decided we didn't feel to badly about our excessive consumption of ratatouillee tart as she pointed out that I ran 6 miles on Friday morning and she'd danced for 3 hours. And, it's made with eggplant and had a minimal quantity of cheese, as opposed to Tomato Pie which has more than it's fair share of cheese and mayonnaise.

We also made some yummy grilled eggplant, cubanelle pepper, tomato, basil and goat cheese sandwiches. I forgot to take a photo of those and they were gone before we realized it.

The secret to good eggplant is the salting. No matter what, no matter how you're going to prepare it (I don't care what the recipe says) you have to salt your eggplant for at least 30 minutes. This requires a bit of planning ahead but I've found I can salt my eggplant before I take MR to ballet (or wherever) and let it sit out for a good hour or two before I actually use it in the recipe.

Just for curiosity's sake, if you opened a dishwasher filled with dirty dishes and found a thousand-leg bug crawling around the bottom of it what would you do?

From an early age, Will has had a thing about spiders.  Once when he was about five we were hiking in Raven Run and he flipped over a piece of bark on a fallen log to reveal a rather large spider.  He dropped his little backpack and ran screaming down the trail.  Like a girl.  We had a hard time catching him and I suppose we're lucky that he still loves to hike.  Today, he particularly hates the scene in the third Lord of the Rings movie with the giant spider that wraps Frodo up in its silk.  When the scene comes on, he either skips ahead in the movie (if he has a remote), closes his eyes and averts his head (if playing in the car), or strolls out to the garage refrigerator for some quick refreshment.  Sometimes at our lakehouse, large spiders will build a web across the dock ladder and perch there as if waiting to catch teen-age boys who have jumped into the lake without realizing they can't get back onto the dock without passing through their webs.

I can't say that I blame Will for his spider terror as I recall my own aversion to spiders from years ago.  I had a spider bite my lip in my sleep two days before my sister's weding when I was eight.  Just thinking that a spider crawled across my face much less bite me makes me feel like an ice cube is melting down my back.

I like to think that I have overcome most of my spider issues as an adult.  Being a pacifist, tree-hugger who would possibly give up meat if everyone else in my house would, too, I just can't bring myself to kill them.  So long as they aren't biting me or in my house, I'm okay with them.  In fact, I'm a total fan of them being outdoors, doing their insectivore web thing, catching and eating nasty flies and mosquitos.  I say spiders and bats unite to rid us of flying bugs!    Do your job and spare us from the overuse of nasty pesticides and other chemicals but let's keep it outdoors.

In that vein, I have taken in recent years to helping indoor spiders relocate.  It's really easy using the glass and paper technique.  With great confidence so that the spider doesn't see my fear, I trap it inside the glass and put the paper on top and then take the glass outside the house.  I quickly turn the glass on its side and then run like hell back into the house before the spider can get me.   It works really well and the best part is that I don't get any bad spider karma.  I live in fear that somewhere, like the Forbidden Forest outside of Hogwarts, perhaps in that side of my yard where the thistles grow so abundantly, there lurk super giant spiders like Aragog.  And just in case there are such things, I want them to remember that I am not a spider killer.


Oh, and when I opened the dishwasher and found the giant thousand legs, I shut the door and pretended it wasn't there.
Posted by Gwennie at 12:04 PM 2 comments:

There I was, sitting in my office minding my own business when I heard heavy breathing behind me.

Hello Lily! I refuse to ever work anywhere again that dogs aren't welcome. 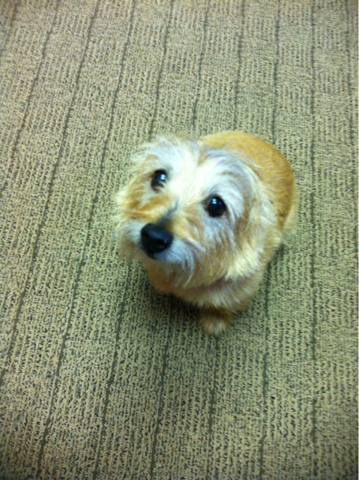 With Mary Rollins starting her junior year (today!!), we find ourselves discussing future career possibilites more and more.  One favorite conversation went something like this.

MR:  I wish there was a job where I could tell people what to eat, how to exercise and what to wear. 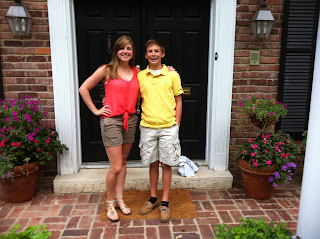 Happy First Day of School!!
Posted by Gwen Williamson Mathews at 10:20 AM 2 comments:

Well, my little children and I returned home a week ago today from our random drive along the east coast. I realized we must have a reputation for interesting travels as numerous people have asked as summer vacation ends, "where did you all go this summer on your big vacation?" I start to say, "oh we didn't really have a vacation" but, in fact, we did. We just didn't get to take Marc with us. We'll make up for that next year. Such a marvelous drive we did have!

Thanks to Fodor's Guide to New England and Yelp, we ate, walked, biked and drove our way through American history. Both kids added several new states to their ever-growing list: Rhode Island, Delaware, New Jersey, Connecticut, and Massachusetts. It's been a long time since I planned a road trip completely by myself. Normally, Marc - who secretly aspires to be a travel agent - has planned, mapped and reserved our trips months in advance. For example we already have reservations for next summer's trip to Yosemite. And, I think there's nothing more satisfying than having things turn out even better than you anticipated (except for getting food poisoning one night in Cape Cod of which there's nothing worse than being alone with your two children throwing up in a hotel room wondering what in the world your going to do if you don't stop being sick).

I loved that everyday we seemed to find a new way to sweat: biking to Mount Vernon, hiking in the wrong shoes along Rock Creek Parkway, wandering through Georgetown and the streets of Old Town Alexandria, exploring Providence, RI, walking the Freedom Trail in Boston, hiking in Lexington & Concord (in the right shoes), sunning ourselves for almost an entire day in Cape Cod*, and visiting Niagara Falls. But my favorite part was that no one complained (except for Will at the Holocaust Museum who said the only thing worse than the Holocaust Museum is the Holocaust) about anything except for my slightly impaired sense of direction. Possibly I have a disability but we did make it home alive.

Here are a few travel tips from the Mathews:

1. Never eat anywhere that you could eat at home.
2. If you can walk there, you probably should.
3. It's bad manners to eavesdrop on tour groups of which you are not a part (so says Mary Rollins. I might disagree).
4. A half-day in Niagara Falls is plenty. Really.
5. Canadian Border Guards are a grumpy lot.

Clearly, we're not from around here and you'd think that they got a lot of tourists here in New England but maybe they don't get a lot of Kentuckians.

As our travels continue, we just tell them we're driving around New England. To which, the reply is usually, "that sounds like so much fun!". And yes, it is!

Having left Washington early on Tuesday morning, we stopped for the night at the Whaler's Inn in Mystic, CT. We wandered the streets of Mystic, debated having actual Mystic Pizza and instead ate at a delicious little restaurant called Azu.

Wednesday, we spent the morning at the Mystic Aquarium which was fantastic. I thought that we might be too old for the Aquarium. We're not. We made friends with Beluga whales and pet sharks and rays. And, we saw a 4-D sponge BoB movie. We were too old for that...

After lunch, we went to Mystic Seaport which Will said was definitely more fun than the Holocaust Museum. Funny thing, I remember going to Mystic Seaport decades ago and loving it. Loving it so much so that I thought it might be the highlight of our trip. It was good but we all agreed that petting those stingrays was more exciting.

Last night we arrived in Providence, Rhode Island. Our hotel is on Federal Hill -- one of the five largest Little Italy neighborhoods in the US. Our hotel is fabulous! Our hotel room is twice the size of Isabug's Brooklyn apartment (and just as difficult to find a parking place). Will not only has his own bed, he has his own room. Did I mention we have a fireplace? I could live here. In fact, everyone but me is sleeping in while I enjoy my hotel room coffee made with real cream from the full-size refrigerator in the room.

Oh, and the food picture is from a wonderful little Italian place called Angela's Civita Farnese I found (thanks to Fodor's) that is going to be on Diner's, Drive ins, and Dives. That's the Braciola. Will took the photo(!) and ordered that because it's one of the dishes they are going to feature on the show. It's one of the few photos I've sent Marc that created actually envy that he wasn't with us. 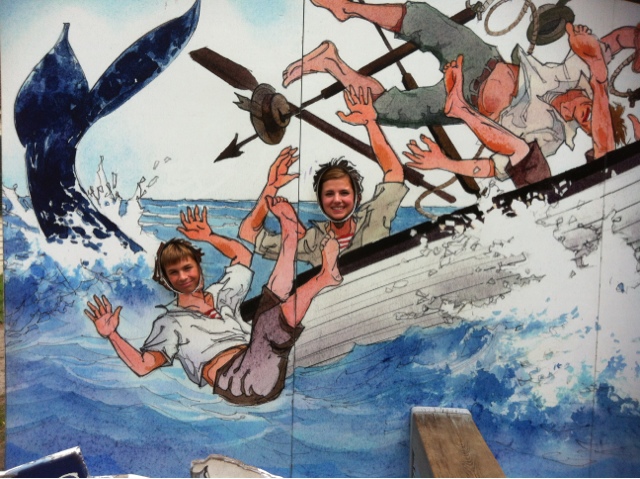 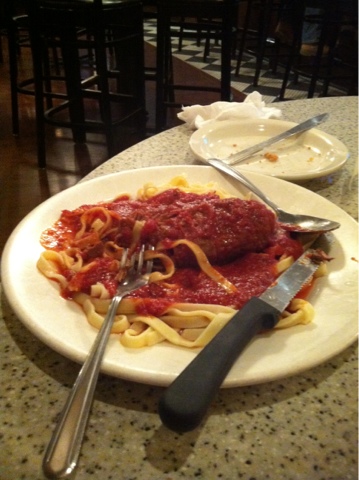 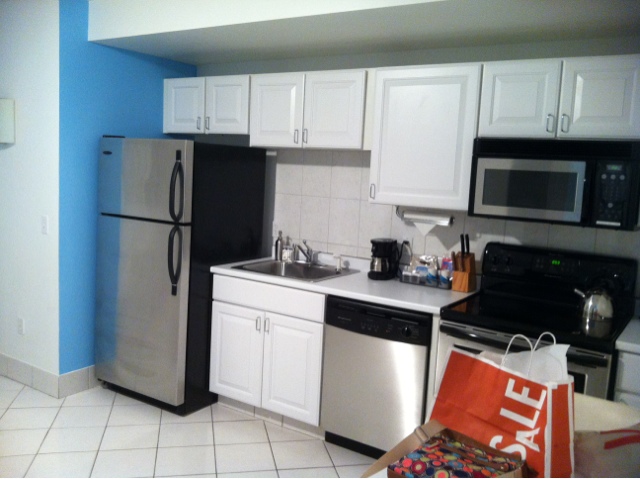 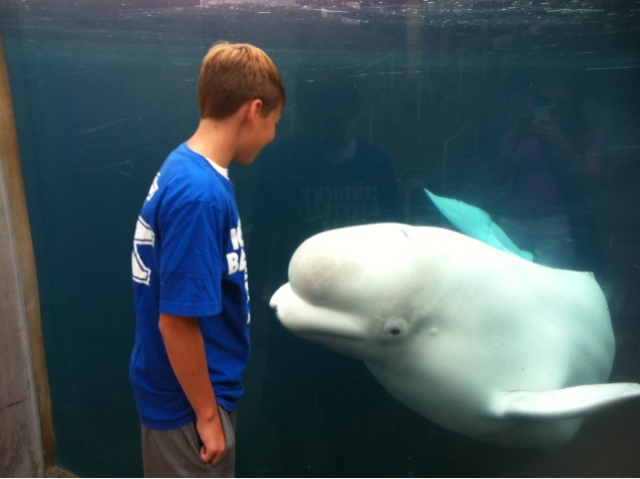 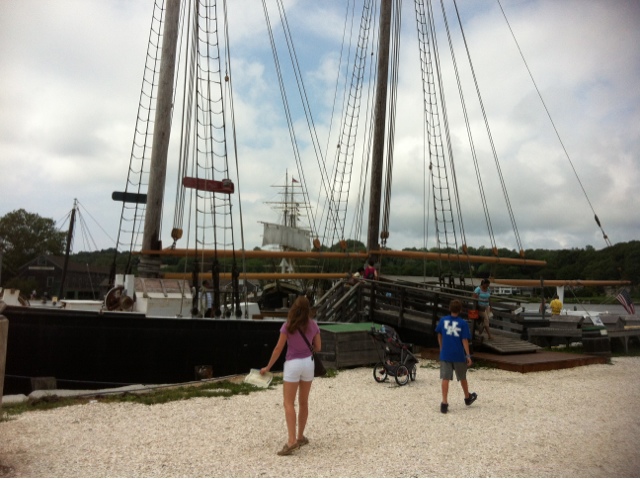 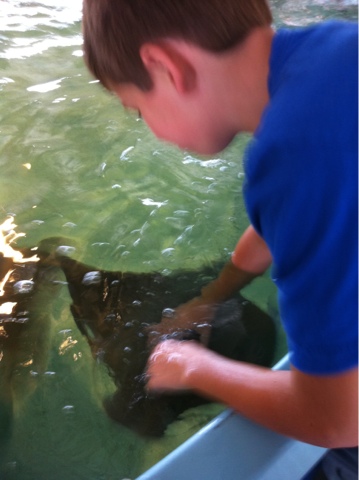 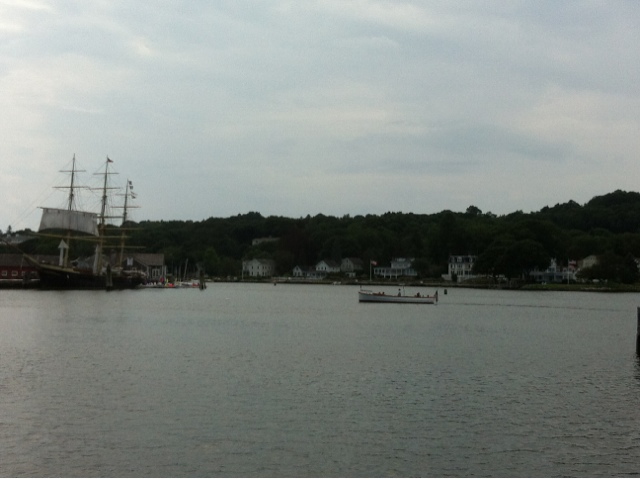 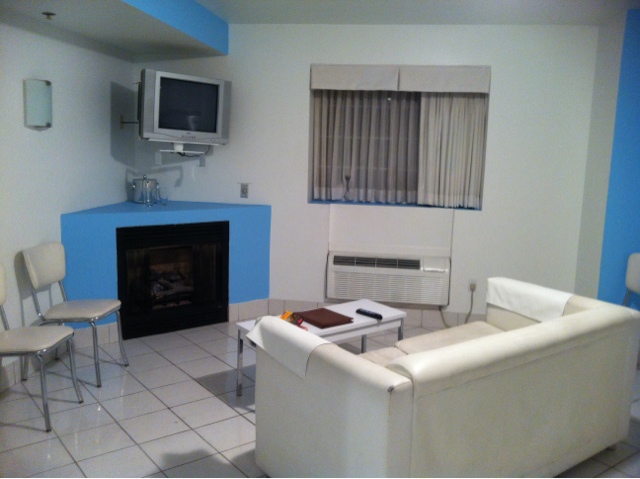 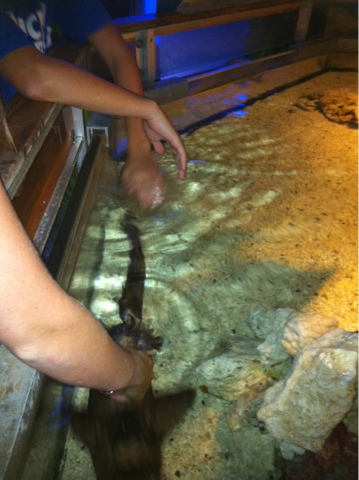 Posted by Gwen Williamson Mathews at 8:31 AM 2 comments: 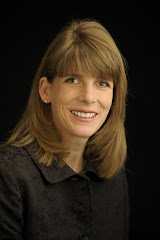 My favorite blogs and links...